Traumas and Miracles by Maria Doneva

Traumas and Miracles by Maria Doneva
Posted on December 31, 2010 by admin

Maria
Traumas and miracles; catastrophes and salvations; desperations and anticipations – in a black-and-white book by photographer Babak Salari and writer Diana Ivanova.
It is as personal as a poetry book. The photographs intense and saturated.
There is no color here, no surplus, no ornament.
Just like the lives of the book’s subjects – energetic, steely people surviving through steely times.
Images that taste of rain, of rust and blood.
Faces and hands and necks covered in scars and lines – from laughter, from pain, from old age.
And the inhabitants of an intimate world – the stove, the cat, the mirror, the dog, the goat, the garden, the floral shirt.
All captions uttered sparsely, as if through pressed lips.
This book radiates a deep but restrained sentiment; a respect for the people; and a curiosity for a civilization which sinks into the past with dignified simplicity.
http://mdoneva.wordpress.com/2010/11/21/travmiichudesa/
Translated from Bulgarian
Radmila Mladenova

Tracing the collective memory through photographs
For, when we will no longer exist, nobody will be able to testify on our behalf. There will be nothing left but the indifferent nature.(Roland Barthes, La camera lucida)

The great authenticity of Babak Salari’s photographic work derives from his experiential contemplation of human existence in exile – a human existence violently deported or simply living on the margins of the society. The charm of his pictures, however, stems from their narrative power, from the way they reflect in black and white stories difficult to tell without evoking a strong emotional charge. The wandering of the self-exiled artist at places traumatized by the war, goes far beyond the simple testimony of a documentary photographer. His clear and penetrating gaze, acts as a mirror, and reveals aspects of the portrayed faces that he looks upon; it reveals wounds and fragments of their identity. The sense of a primordial realism, intimate and humanistic runs through the artist’s photographic corpus dispersed in a wider anthropogeographical map. From war victims in Afghanistan and Iraq to the uprooted people of Palestine and from the matriarchal communities in Mexico to the gay communities of Cuba, Salari is searching underneath the surface for the real face, and tries to reveal for us the unsaid, albeit discreetly. More than this he activates memories.

In the book “Traumas and Miracles: Portraits from Northwestern Bulgaria”, published by the Bulgarian publishing house Janet 45, with Babak Salari’s photographs and Diana Ivanova’s texts, the reader has the possibility to experience a sample of his new artistic project, which was also presented on Aug 2010 in the National Gallery of Sofia. This naturalized Canadian of Iranian origin, while moving away from his previous themes, has remained faithful to his deeply humanistic spirit. He has travelled along with the journalist and writer Diana Ivanova to the birthplace of the latter, a place traumatized by consecutive political and economic crises in the postwar era. This particular photographic work, consisting of more than 2000 black and white photographs, is the fruit of a series of meetings and interviews with some of the remaining dwellers in the area. In one of the poorest spots in Europe, faces aged by the ravages of time and history, “are offered” in front of Salaris’s camera in the most silent and unaffectedly touching way. Gazes and bodies, spaces and objects are presented in a state of loneliness and abandonment, loss and frustration.
In the published book the accompanying brief texts beside selected photographs, illuminate for us the life of the persons contained within them, sometimes via simple comments and at other times through the voices of the subjects, which touch us especially in terms of their simplicity and truth. Finally the dialogue between the two contributors and Ivanova’s introductory text clarify for us the motivation that led them to the concept of this specific project.

People of nine villages in Northwestern Bulgaria fill the camera lens of Salari. Female migration has exacerbated the depleted populations of these already ageing populations. These are places that carry the wounds of past with them, intensively. Under the burden of sweeping political and social change these forgotten “last guardians”, as Ivanova calls them, are filled with memories deprived of any kind of nostalgia while at the same time they witness a cruel reality: the gradual devastation of their villages and the end of an era.
In the “Portraits from Northwestern Bulgaria” the biographical element meets the psychographic one in a unique way. In every image we find human stories, and each story is a reflection that traces the trauma and afflictions of the persons contained within. Their gaze, an element expressed in previous works of the artist, reveals important aspects of their character. Additionally the tightened lips, the neck, the hands and the body posture are the detail that completes their substance and helps us to understand them better.
Salari as a visual poet shares with us the faces he shoots and their own depth. But his look here obtains a more intense sadness. A memory of life and even a suspicion of death run over most of his photographs. If poverty and material decay augur a certain death, it is the bright shadow of these bodies that makes them magnificent: the particular aura which accompanies these bodies in the various shades of grey reflects signs of a different kind, such as obstinacy and dignity, submission and abandonment, desolation and uncertainty. Most of all, we hear their deafening loneliness. 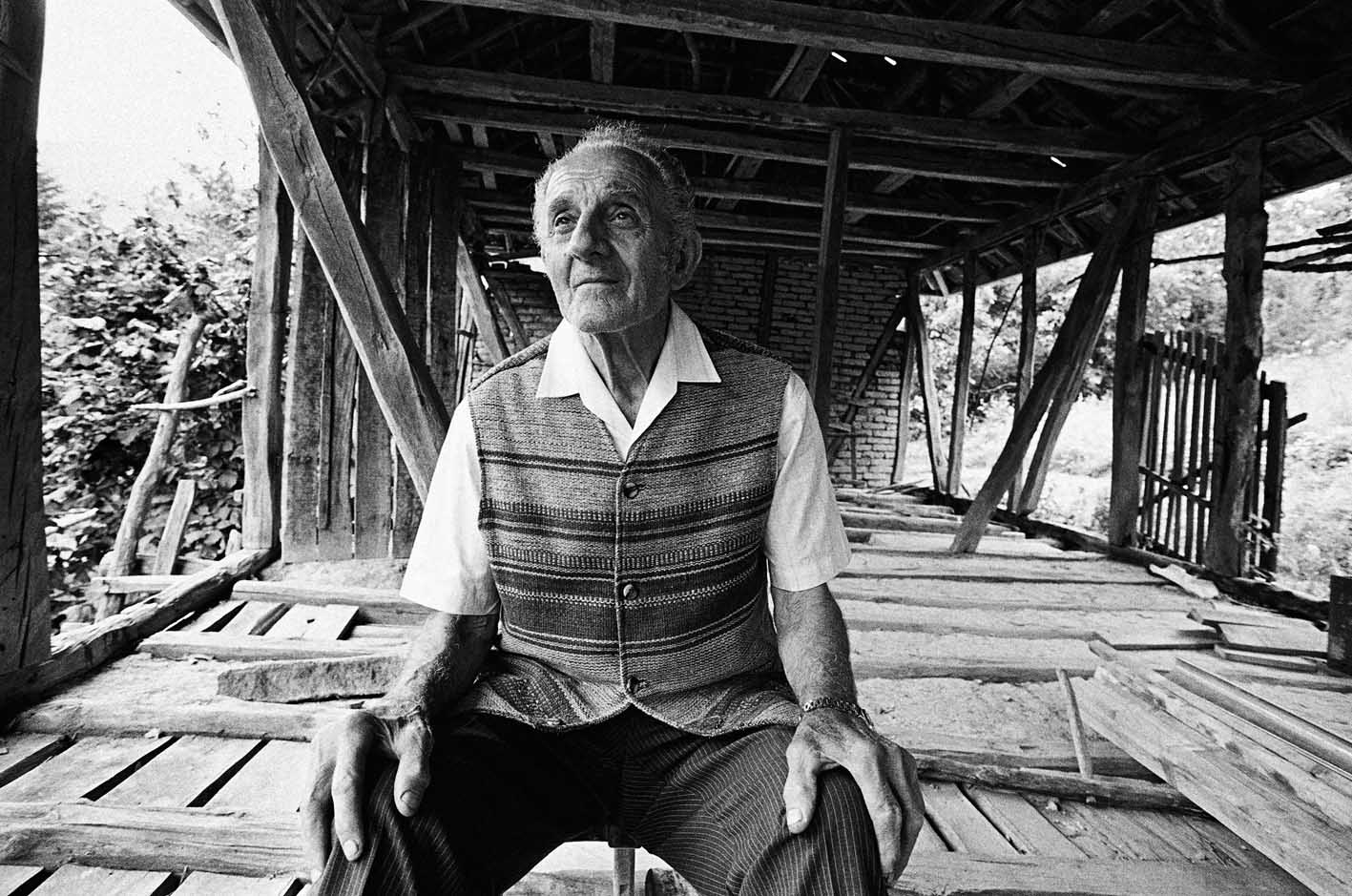 In this series the scenic mastery of the photographer seems more mature than ever. The pictures of the faces have been shot in their natural environment, in house interiors, and even in yards or streets. Sometimes the scenery is even more minimal, a plain wall, a staircase, a window. In any case it is all about a standing place, which is filled with human absenceand memories. A place of silence, desolation and decay, where even life seems frozen in the time. Interestingly, in some photographs we can sense a kind of sociability, there is a yearning to heal and console at the same time.

As with Salari’s previous photographic series, the people narrate their own shocking stories. Faces worn down by hard labour have survived the collapse of two political systems, economic collapse and political crisis. The history is reflected in their bodies as a palimpsest of traumatical experiences: the ideological denial, the poverty, the migration, the gradual devastation and the end of their villages. On the other hand they hold a faith towards the mysteries of life that derives from an old tradition. Babak Salari’s photographs in dialogue with Diana Ivanova’s texts map the memories of both the individual and the collective, the frustration but also the hope of a society that is gradually approaching closure.

A world so close to us

According to Roland Barthes “a photograph is subversive not when stimulating or stigmatizing but when reflective… when it makes you reflect on life, death, or on the merciless extinction of the generations”. In these few inhabitants of Northwestern Bulgaria we can recognize the signs of a society familiar to us, of a gradually shrinking society as evidenced by many Greek villages every time we visit them. Such visits make us feel some temporary euphoria, but such visits also give us an identical lump in our throats and the same feelings of melancholy. The only difference is that in Babak Salari’s photographs we experience these signs in a more captivating way; the faces that stand before us, despite the feelings of tenderness and love that emerge from within, hold deep inside the scar of History.

Kalliopi Poutouroglou is a film critic for the web magazine, Cinephilia.gr, and teacher of Greek language in Greece and abroad.

This entry was posted in Book Reviews, Bulgaria. Bookmark the permalink.