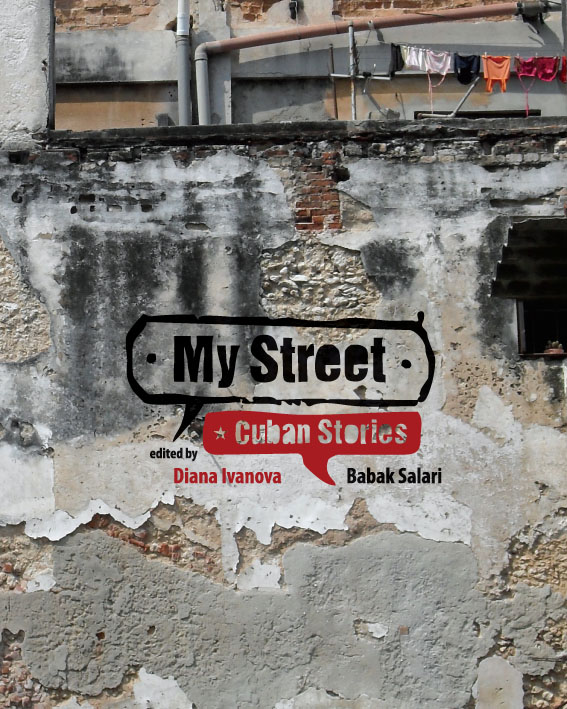 Mi calle is a part of a multinational book project that began in Bulgaria in 2006 by Diana Ivanova and Boris Deliradev. Initially supported by the British Council of Bulgaria, the concept was part of a broader endeavor, “The European Union and Me,” which culminated with a book publication and a traveling exhibition. Mi calle was carried out by the editors, Bulgarian writer and journalist-anthropologist Diana Ivanova, and the Canadian-Iranian photographer, Babak Salari. Both ‘authors’ (though technically they are editors) traveled to Cuba in 2009 where they met, mainly through key informants, mostly young people in Havana, San José de las Lajas, Cienfuegos, Trinidad, Holguín, Gibara and Santiago de Cuba. They asked fifty-two residents to write about their streets and neighborhoods and to take photographs of them as well. (More information about the methodology of the project can be had at their website, http://www.my-street.org/

Readers will immediately recognize this and related participatory projects in which ‘locals’ are asked by ‘outsiders’ to share knowledge with a larger community in the form of short stories, poems, photographs, oral histories, and related forms of testimony and witness. Mi calle presents them in their original Spanish, though Bulgarian and English versions of the work are also available at the website noted above.

The topics covered in these short essays include tales of pleasant and nosey neighbors, songs and smells that punctuate the streetscape as strongly as the tropical sun, the look of the street, familiar landmarks that stand as silent witnesses to the passing of time, reflections of where intimate moments occurred, and other facets of daily living (la vida cotidiana). It is the sort of humanist and cultural geographies that appear to have faded away under the post-modernist gaze.

To the authors’ credit, this is no political whitewashing of a country that is often overly romanticized. Writer Betsy Diaz, 15, from Centro Habana, mentions the nearly ubiquitous presence of the Committee for the Defense of the Revolution (CDR). Mayte Cueto from Arroyo Naranjo describes the importance of Afro-Cuban religions as a prelude to her 70-year old neighbor, Carmelina. And Alexis Alvarez, 28, from San José de las Lajas remarks on the apolitical aura of his neighborhood: “Mi barrio es tranquilo y cada vecino es peculiar. No se hacen guardias cederistas [CDR neighborhood-watch duty], no se celebran festividades de comité y eso me gusta” (91). The use of metaphor is refreshing, and story number 37, Amor sin condón, reflects the creative play on words when the reader least expects it.

Mi calle suggests numerous possibilities for Latinamericanists concerned about place attachment, vernacular landscape, and local expression. Readers with just a few years of high-school Spanish and a pocket dictionary can make their way through these pages. It would make for a wonderful companion for anyone traveling through the island since each historia carries a title, the author’s name and age, and his or her street address
210 Journal of Latin American Geography

and town name. Why not visit them, get their autograph, and engage them? The book would lend itself nicely to a class with students who would be interested in what other young people think and write about the island. It would also serve as a model for a field course in any city, town, or hamlet in Latin America and the Caribbean. This refreshing genre of travel and sightseeing in such a high-tech age has seen an upsurge in recent years. Lending the locals’ disposable cameras is also a strong complement to the texts, and Mi Calle is laced with color photographs on every other page, most by locals, and some by co-author Salari who is trained as professional photographer and documentary filmmaker.
Tales of longing and stories of wanting and melancholy make Mi calle a delightful portal to the human condition in Cuba. The book offers inductive, ethnographic insights into a world few of us can imagine. Testimonies like these will underscore many of the reasons field researchers chose their line of inquiry in the first place. For some readers, it will provide respite in a nomothetic world characterized by SOCIAL THEORY in capital letters, while avoiding the pitfalls of idiographic research. As the subtitle of the work portends, there are many stories and many histories to these places, and Ivanova and Salari provide an intriguing window to fifty-two of them. Academicians searching for a reason to conduct prolonged study-abroad courses might use this as a service-learning model where the foreign participants share tales of their own streets. Imagine the possibilities.

This entry was posted in Book Reviews, Cuba. Bookmark the permalink.