Remembering The People of Afghanistan By David Hopkins

In a fast paced world with media focussed on single, dramatic images there is the danger that extended documentary work like that of Babak Salari’s may be missed in the rush for the next great cover shot. Salari’s photographs, by contrast, require us to slow down and savour the moments he has rendered on film. Like any story, the best way to experience “Remembering the People of Afghanistan” is to be conscious of the telling and willing to let ourselves be affected by it. Salari’s photos form a rich, complex story told in a soft voice. It is the story of a people recounted with empathy and respect. At times, it is also autobiographical as Salari appears to relive moments and spaces of his own exile in the lives of those in front of his camera.

The story here is narrated in quiet silvery tones, bold heavy shadows, in the rhythm of repeating forms and faces, in telling layers, dusty floors, in the eyes of children and adults, in the turn of a person’s hand. Salari captures these elements with his typical understatement; done with such sleight-of-hand, we must be attentive, even revisit images to fully appreciate them.

Some pictures are tapestries of information with multiple focal points. The market scene in Kandahar (pages 152-153) is a photograph that I have returned to several times. Salari has timed and framed the photo so that its nine primary figures are connected by a subliminal resonance, one that ties them to each other and forms the compositional fabric of the photograph. Despite their interconnectedness, each of these elements suggests a unique story: the upturned toes in the shade of the parasol; the men finalizing a transaction; the women in burquas crossing the frame, one heavyset, the other slight; the tented profile overlooking the street; the shadow occupied by a man who has noticed the photographer; the youth sitting against the shade on the wall; the passer-by with a folded blanket on his shoulder; the dark opening punctuated by a white hat and clothes. These protagonists lead us through the image, a single story. 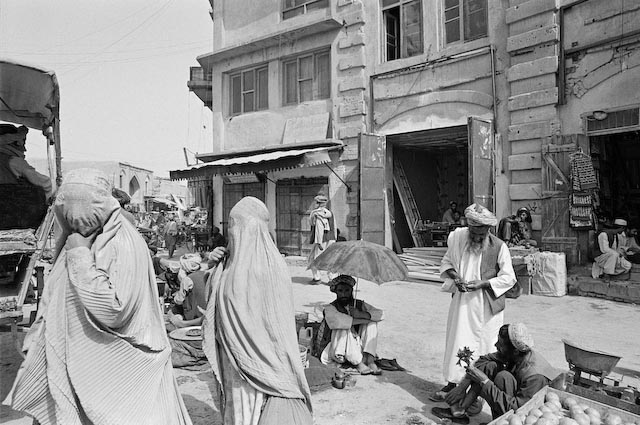 In reality, the subjects were at various depths in the scene and Salari has contained, frozen, flattened and connected them in a two-dimensional space. The figures are spread across a flat plane in a considered, aesthetic pattern: the sweeping hand of the man with the blanket now almost brushes the parasol of the man with the upturned toes. Yet Salari keeps this transformation discreet. He chooses to remain faithful to the original scene, chooses not to draw attention to himself or the photographic process.

Hands play an integral role in this collection. Salari consistently incorporates them: look for them in portraits, in gestures, at the edges of a frame. Salari is conscious of how they complement faces and expressions, and is careful to include them and the insight they offer. In the makeshift cemetery (pages 16-17), the rigid hands that break through the burial shroud are contrasted with the supple forms of the hands attending the dead. 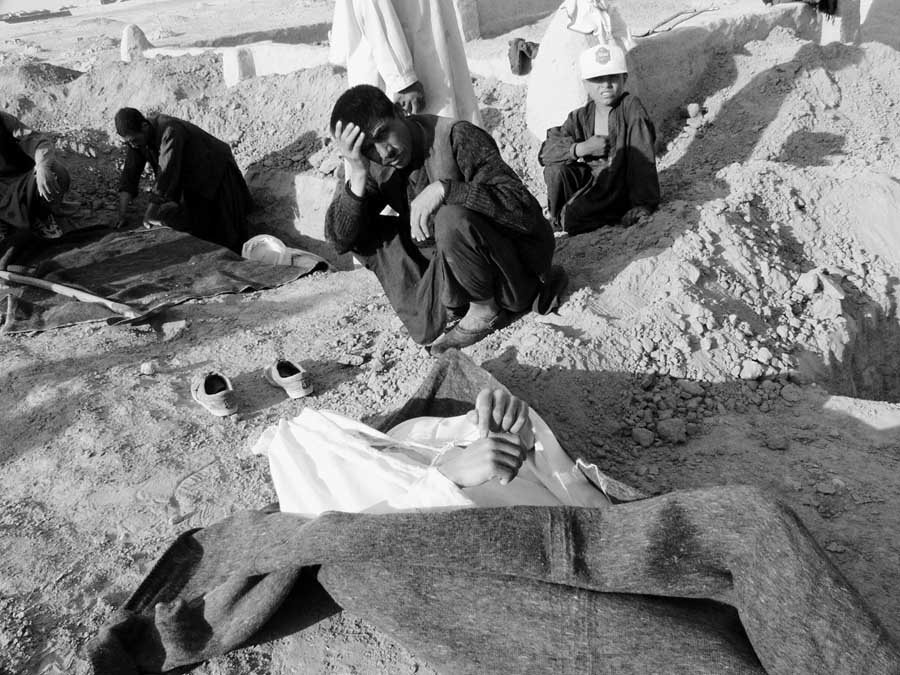 To appreciate the skill and eloquence of Salari’s photography is to appreciate his telling of the story. But Babak specifically invites us to look beyond the language of his photography to the story itself, the people. We are invited to connect with the Afghans, witness them as actual people instead of the generic background figures that populate daily news clips. These pictures are intimate and personal, open. They show us the character, dignity and strength of civilian Afghans who live, play, work and study in a dire physical and political landscape. These pictures motivate.

David Hopkins is the former chair of the Department of Professional Photography at Dawson College. He has been an active teacher for over thirty years and is a recipient of the college’s Director General’s Award for Teaching Excellence. He has written numerous articles for magazines in Canada and the United States and maintains an extensive blog dedicated to photography and education in photography.

This entry was posted in Afghanistan, Book Reviews. Bookmark the permalink.